The quinoa craze shows no signs of slowing down, so it’s time to embrace what this superfood can do. As it turns out, applying the grain directly to your face may be just as good for you as eating it. Quinoa—a general term that includes 120 known varieties—can help protect against common skin issues, from damaged skin, to fine lines and wrinkles. Now that autumn is here, the time is right to learn some new skincare techniques.

“Quinoa contains lysine, which is a key ingredient our bodies need [and] which cannot be synthesized by the body and must be provided by our diet,” Michele Green, a dermatologist practicing in New York, tells Newsweek. “It is the building block in the synthesis of collagen and elastin.” Proteins contain peptide chains that are made up of amino acids. Shainhouse explains that “amino acids and peptides that get into the dermis [deeper skin] can trick the body into thinking collagen is broken, and stimulate it to create new, healthy, young collagen.”

The amount of vitamin B found in quinoa may reduce the dark melanin deposits that lead to age spots and other skin pigment-related conditions. Vitamin B12 interacts with other B vitamins to maintain a healthy skin complexion by regulating the production of melanin, according to Livestrong. Similarly, quinoa contains tyrosinase inhibitors, which are enzymes that decrease pigmentation, and therefore, brightens skin, according to a 2015 study. These enzymes help reduce melanin and hyperpigmentation.

Quinoa is sometimes used as a home remedy for acne due to the niacinamide (vitamin B3) content. Vitamin B3 is “soothing to red, inflamed acne/rosacea-prone skin and helps to repair the skin barrier to minimize irritation and dryness,” says Shainhouse. The whole grain also contains ecysteroids, a compound found to help with acne scarring. It can help rebuild skin through matrix metalloproteinases (MMP), leading to collagen breakdown over time.

Quinoa can act as a safe and natural skin exfoliant because it has a soft husk, which means the grains are smooth enough not to tear the skin. Dr. Elizabeth Trattner, an acupuncturist based on Miami, Florida, says that many women from Andean countries like Peru, Bolivia, and Northern Chile, where quinoa is grown, use the grain to gently exfoliate their face, but she advises to make sure the quinoa is gently grounded. “Mix with an organic skin oil or water and gently rub into the face,” Trattner tells Newsweek. “Rinse with a damp cloth and make sure the quinoa doesn’t block the drain.” 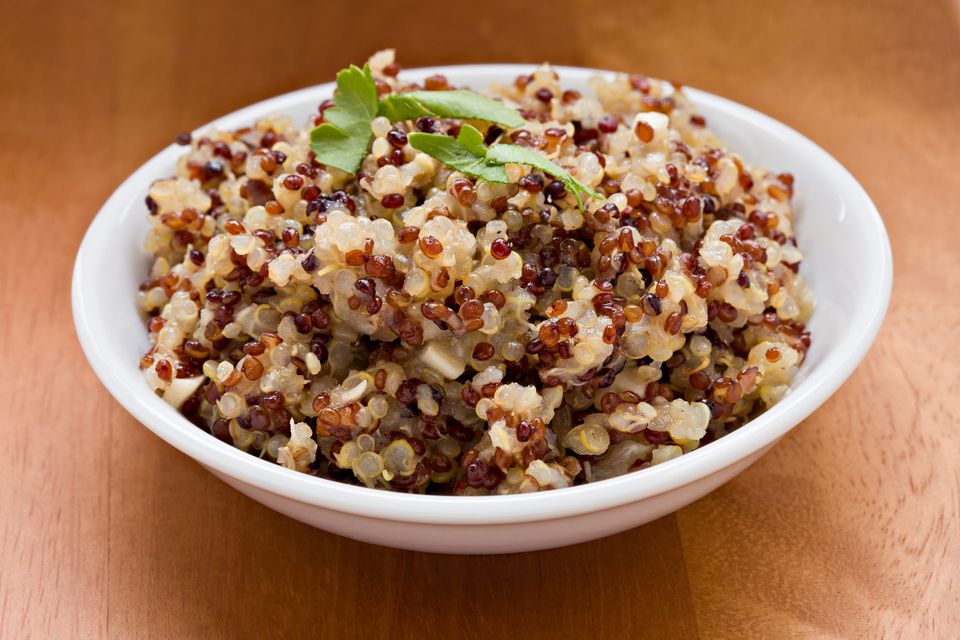 Vitamin A in quinoa can help stimulate the skin to produce new collagen over time, which can reduce the appearance of fine lines and strengthen the skin to make it look and feel young, according to a 2007 study. “This [vitamin A] is the ingredient in RetinA, the potent, scientifically proven anti-aging cream,” says Shainhouse. Vitamin B2, also known as riboflavin and found in quinoa, is key in helping maintain skin elasticity and vibrantly glowing and firm skin, according to Shainhouse.

Quinoa is extremely high in antioxidants, which neutralize free radicals, and may help prevent some diseases. In a 2009 study, researchers found that among five cereals, three pseudo-cereals (grain-like non-grasses, including amaranth, buckwheat and also quinoa), and two legumes, quinoa had the highest antioxidant content of all. Compared to other foods in the study, quinoa and kaniwa (another pseudo-cereal) had the most antioxidant activity.

Quinoa can help as a supplement to a skincare routine, but is not meant to replace treatment for serious skin conditions. Trattner stresses, “It is important for readers to realize using quinoa alone will not cure their skin and hair issues.”